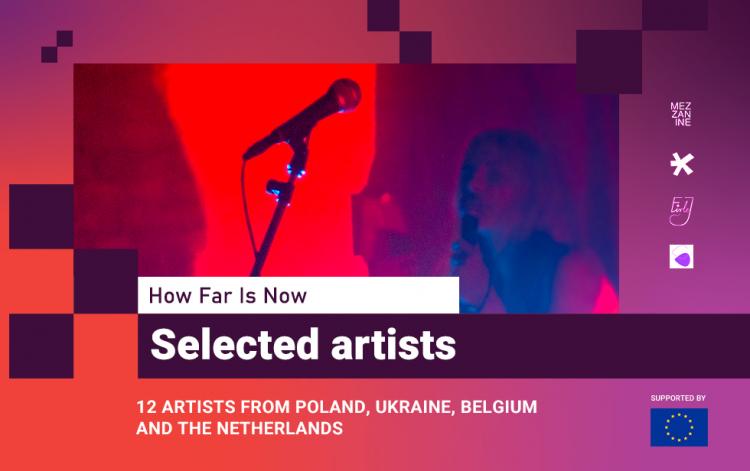 Names of the finalists of EU’s supported project ‘How far is now?’ are revealed

We are extremely happy to announce 12 artists from 4 European countries selected for participation in our EU’s supported project ‘How far is now’ Thank you to everyone who applied! We have got 278 applications, which proves that the project idea is much needed. All our team really appreciates your attention and support.

All these artists will be invited for the recording of live-set and a series of interviews in their countries in June-July 2021. Each selected artist (band) will get a moderate artist fee to cover logistic and administrative expenses during the recordings. Starting from September 2021 during a 12-weeks marathon all these live-videos will be weekly premiered in all 4 countries.

Names of the finalists: 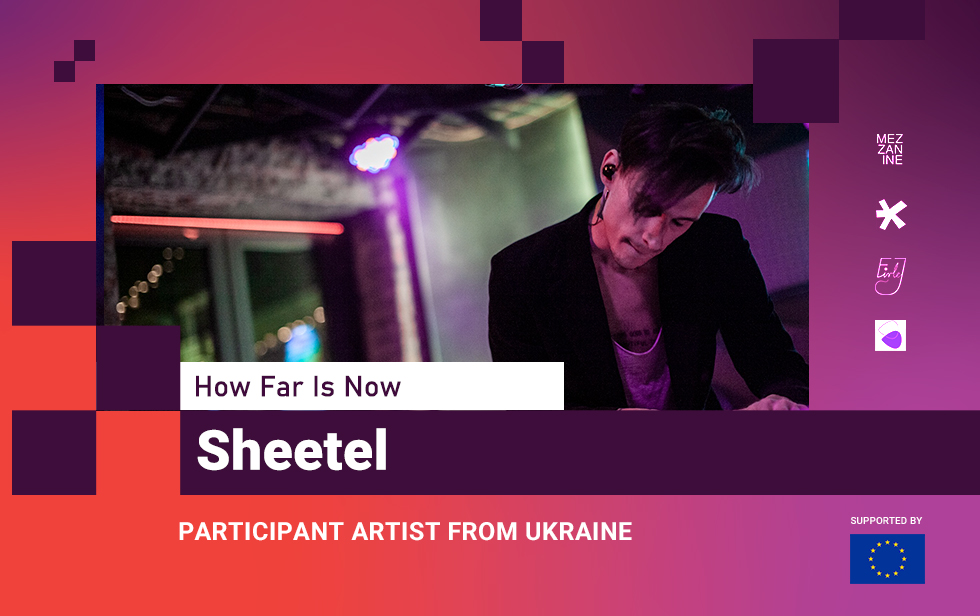 Sheetel is a music project from Kyiv, Ukraine. During their live shows, they combine music and different forms of art like theatre and visual performances. The band has two constant members — lead singer and pianist Anton Sheetel and drummer Anton Aksionov, although at the concerts it often expands to a small orchestra, including double bass, sax, cello and other instruments. Their dark shaman music absorbs a lot from trip-hop, jazz and grunge. 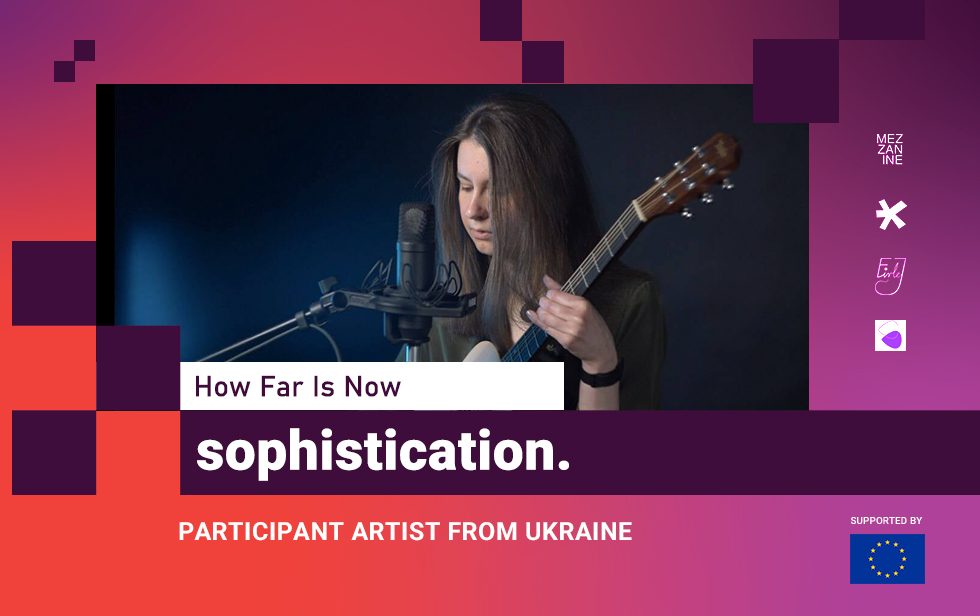 sophistication. is a one-woman band guided by Kyiv based musician Sofia Shvager who combines an acoustic guitar with a piercing voice making quite a minimalistic, calm and chill sound. She enriches her rather folk sound to create a slow city-meditation through her stories, a bit dark, a bit melancholy but still quiet and warm. 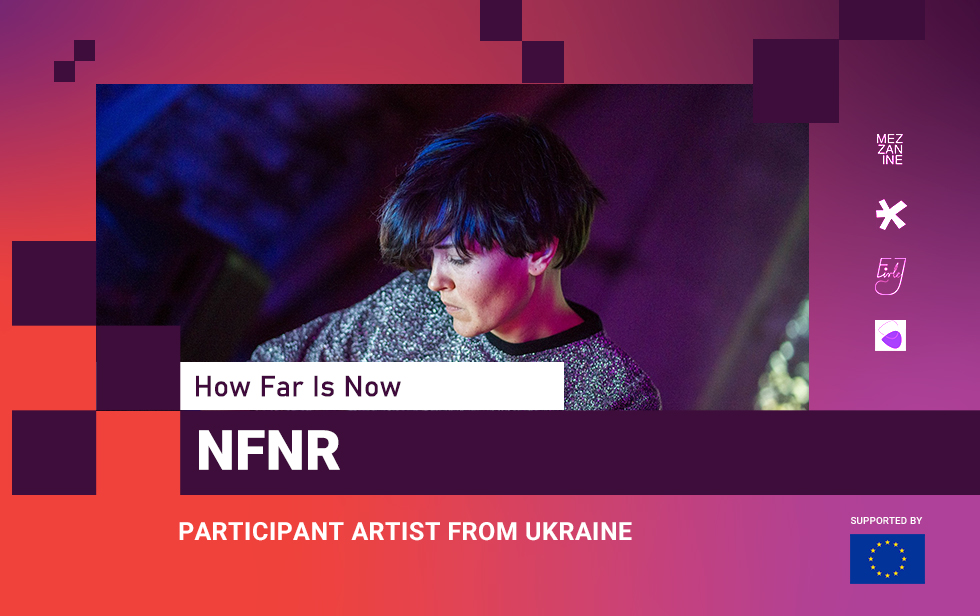 NFNR is an artistic name of Olesia Onykiienko — Ukrainian musician, theatrical and film composer. She transformed her choral music practices into electronic composition in different genres, combining multi-layered polyphonic textures of modular vst and analog synths with another passion industrial field recordings. 2020 she released a soundscape, music-concrete album together with Anna Khvyl `Bubny Voices`, has singles releases on Cashmere Radio and Corridor Audio label, self-released albums — upcoming new one in 2021 is album `Cards against humanity on Corridor Audio. DTF Magazine included NFNR in the TOP-10 of female DJs and producers of the Kyiv scene. 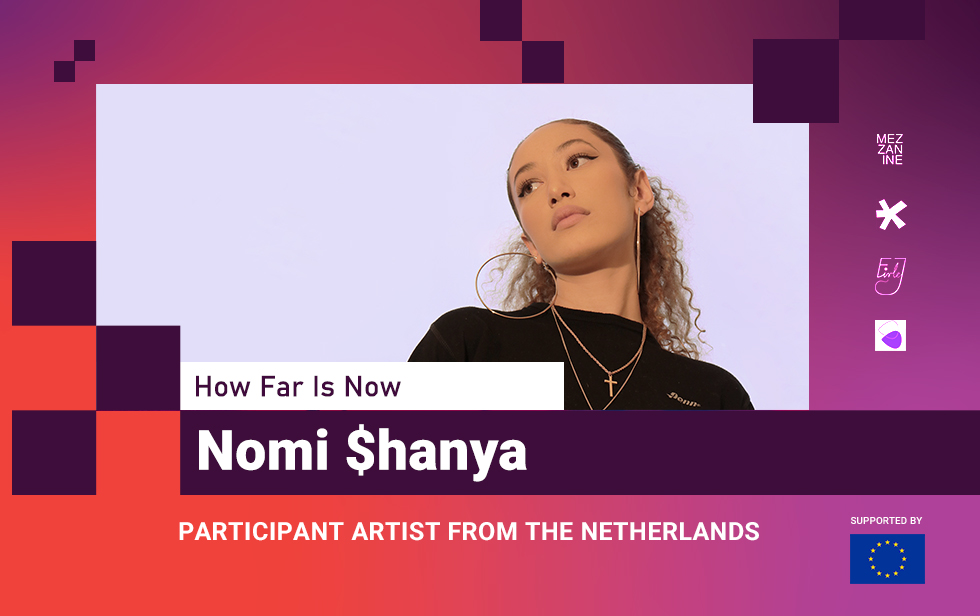 Nomi $hanya is a producer and singer-songwriter from The Netherlands. She mainly produces a combination of old school and new school R&B. “Making music has been my key to learn about myself,” — says the artist. 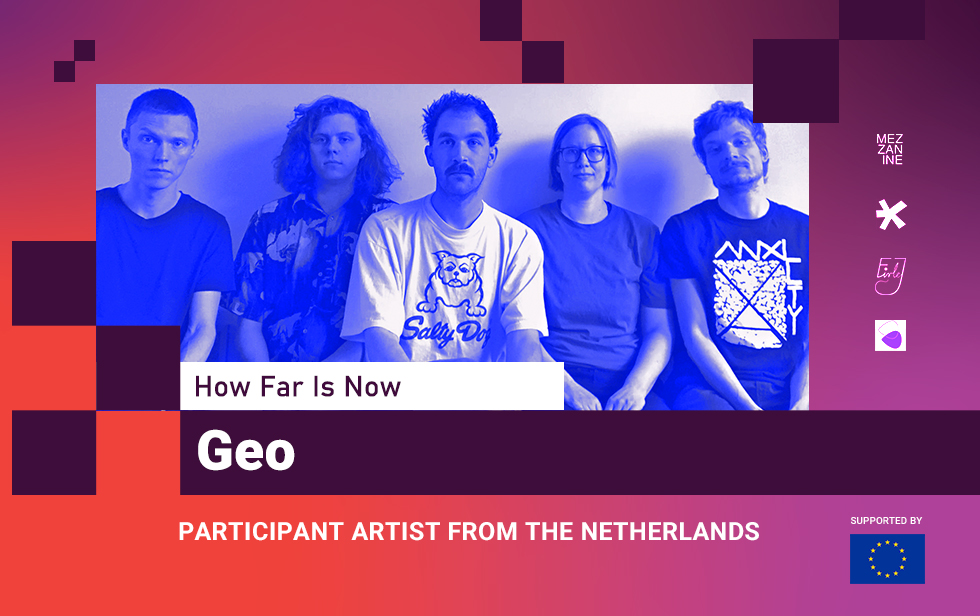 Geo started just before Corona hit us all. This made us wait for their debut release, and the upcoming shows. All its members have been around the underground for a long time. As programmers, artists and musicians in bands such as Lewsberg, Rats on Rafts, Sweat Tongue, Adept, Santa Fé, Fake O's, Willie Darktrousers and more. The band is here to encourage people to be weird, emotional, sincere and physical.  Their message translates to music that looks for the edges; making weird funk and danceable punk. 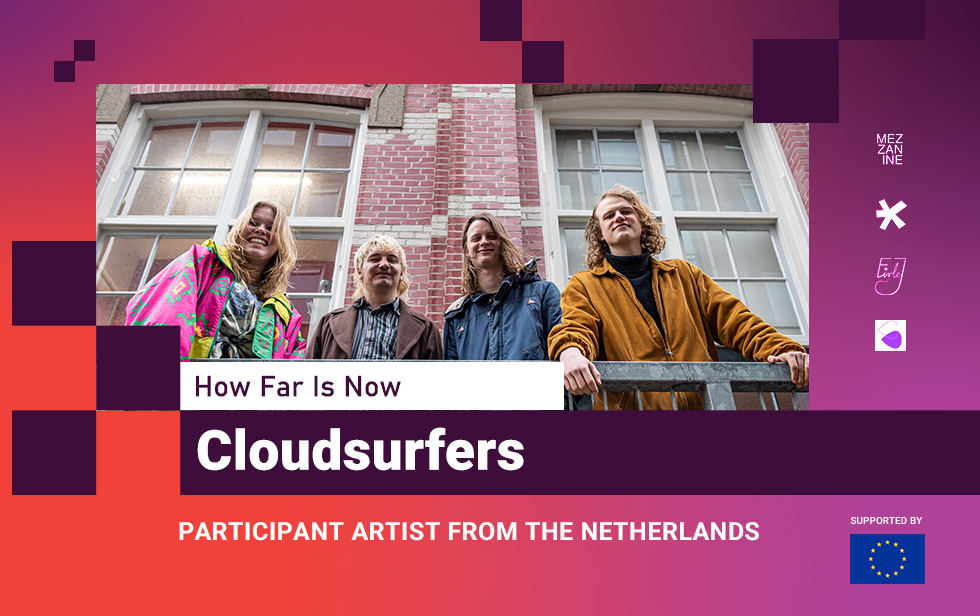 CLOUDSURFERS is a dangerously tasty mix of sunny surf and loud punk rock. Manic guitar leads, twangy riffs and grungy vocals are being pushed forward by a flaming rhythm section. CLOUDSURFERS blends the unpredictableness of Pulp Fiction, the sweat of Oh Sees and the garage pop of Together Pangea! Cloudsurfers' debut album was released on March 19th. 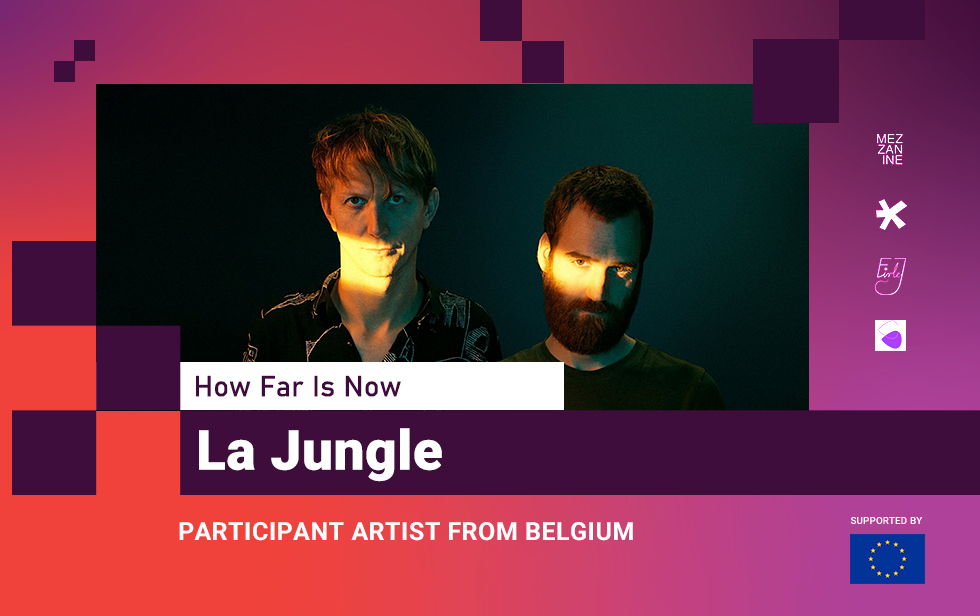 While definitely a child of noise rock, La Jungle takes bits-and-bobs from the whole music spectrum and loop them live with the aim to create compulsive and repetitive sequences. Hypnotic, spontaneous and willingly throbbing, sometimes bordering on an endless groove, their music may even include brief oriental doom pulses or metal diversions bang in the middle of some krautrock epic trip. 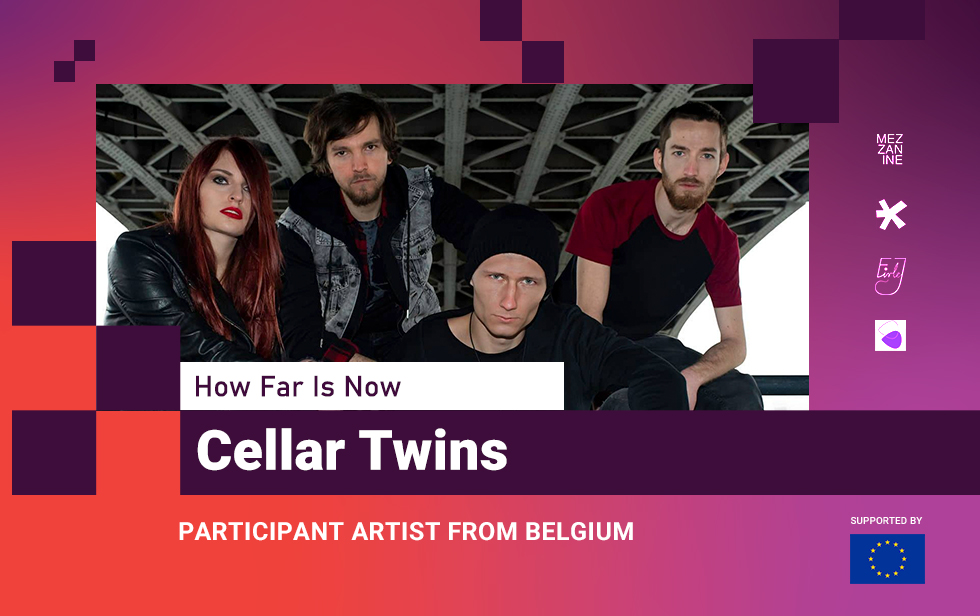 Cellar Twins is a modern rock band with an enigmatic sound identity. Composed of 4 Belgians and founded in 2014, the group offers an intense journey into a unique universe where light and darkness combine. After a first EP in 2017, the band released the album DUALITY in December 2019, praised by many Belgian and international critics. At the end of 2020 Cellar Twins signed with the Italian label Rockshots records and their American booker "Death by metal". Somewhere between passion and rebellion, Cellar Twins revitalizes a multitude of musical horizons and asserts itself as a new image of rock music. 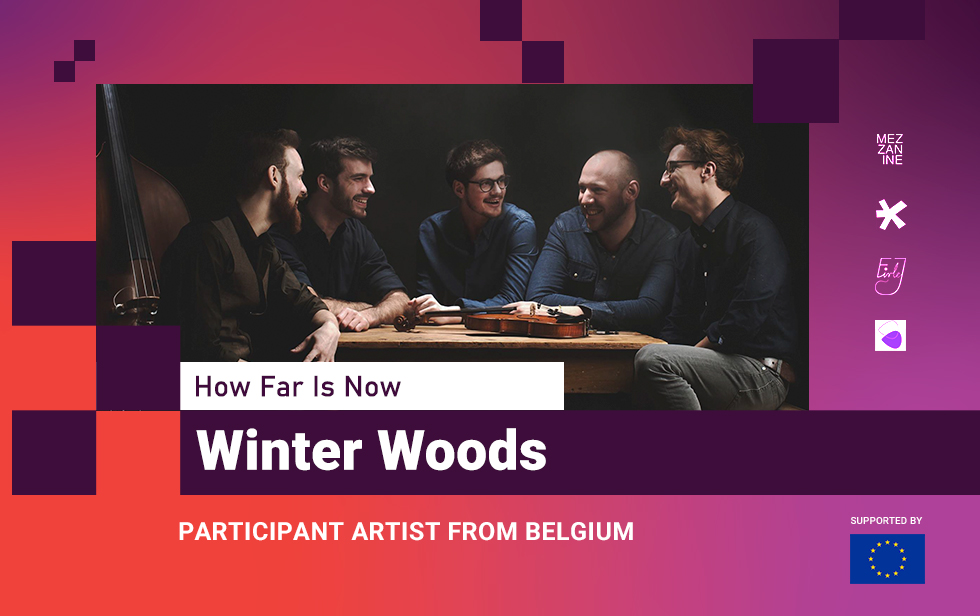 Within this project, they are looking for a pure expression of their souls throughout music. Shades of sound are at the heart of their tracks, using the blunt power of acoustic instruments: Guitar, banjo,  double bass, violin, piano. After hitting more than 3M streams with their single "Change is coming" and having the support of most of the Belgian radio's (Classic 21, Bel RTL, Nostalgie, Mint, Maximum) they recorded their very first album "Rosewood" at the ICP studio in Brussels. This full album is out on 15th November. 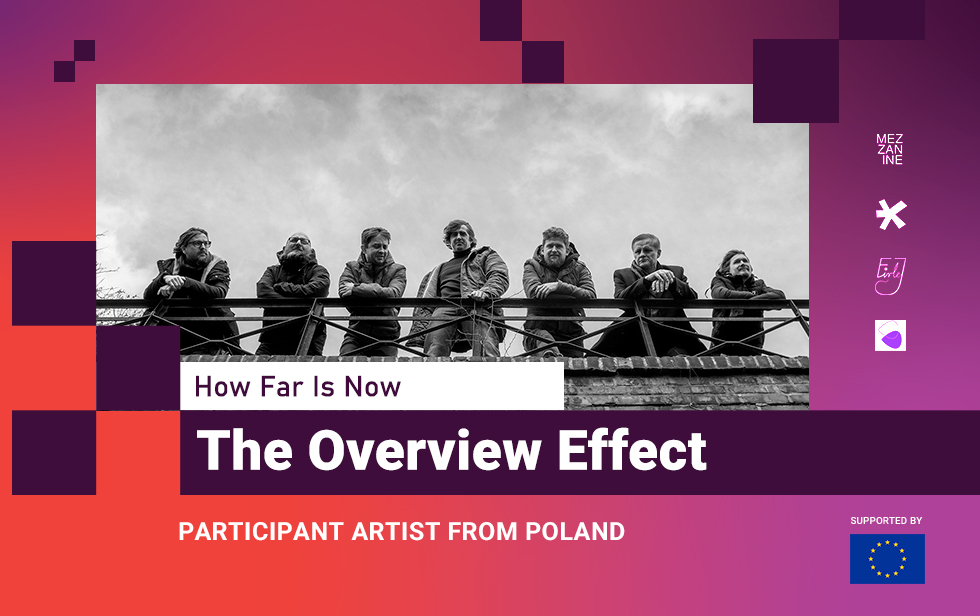 OvE (The Overview Effect) is a band made up of musicians from Ostrzeszów (Poland) known for playing in Vermona Kids, Let The Boy Decide, Blue Raincoat, Soldering Iron, Last Train Is The Slowest or Low-Cut. On first album - "Without territory", which will be released in summer 2021 by Fonoradar Records, they treat us with a juicy fusion of soul, jazz, afrobeat and probably other trends that are not they still have names. Rhythmic energy, guitar and keyboard spaces intertwine with the singing of the brass section, creating an original musical mixture. 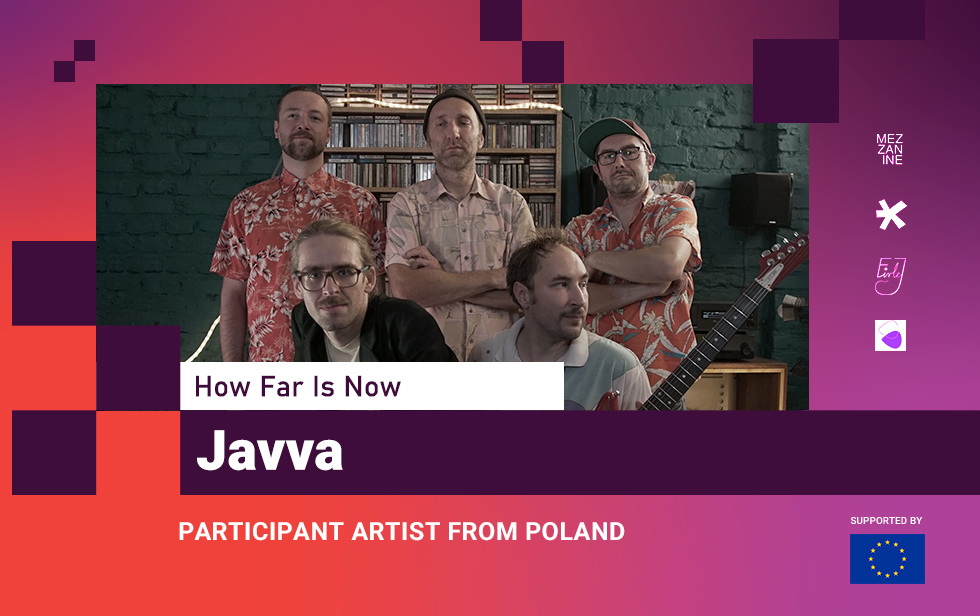 Javva is a band formed by five well known Polish musicians that have the experience regarding various genres and fields of musical activity over the past two decades. Each of JAVVA members have different approach on modern rhythm-based rock music.

The project was initiated by Bartek Kapsa - drummer of such bands as Something Like Elvis, Contemporary Noise Sextet, Helatone or Tropy. He is also the co-founder of Electric Eye Records. Bartek invited Mikołaj Zieliński to collaboration. Mikołaj is a guitarist and bassist best known from the family of related bands called Alameda Organisation, with which he released 5 albums at Instant Classic label. Alongside the other JAVVA member - Łukasz Jędrzejczak, who is responsible for vocals, keys, elecronics and percussions - he is also a member of electronic trio T'ien Lai. The fourth member of JAVVA is Piotr Bukowski - guitarist and synthesizer player who is also the founder and co-founder of bands: Hokei, Xenony or Stwory as well as duo with Hubert Zemler Opla. Last member (since Sep. 2020) of JAVVA is inż. Maciej Moretti Moruś well know as member of almost all the amazing bands of the local and non-local music scene. Long to write. He is in.

I play guitar i write music trying my best to communicate my truths to others it’s easier for me to play songs than start conversations. luckily i got some awesome songs

The project is supported by the European Union.